When To Prune Roses 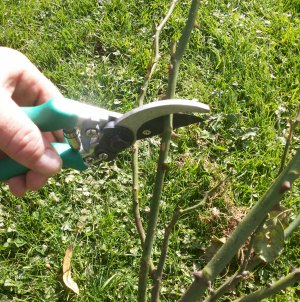 Finding the right time to prune roses is not a problem and it is not a mystery only rose experts penetrate.

In one thing the experts agree on pruning: The annual pruning in early spring will bring the best blooming results.

After years of observation, I have learned that it makes sense to wait until the buds start to swell or show several red leaves.

The correct timing varies from early January in warmer regions to May in several areas with colder climates. In any case, wait until the most severe frosts are over.

Late pruning will bring back better results compared to early pruning and brings several advantages to the gardener:

In summer withered flowers of repeat-blooming rose varieties regularly are cleaned out.

Why, when and how to do it, you can find on “Dead-heading Roses”.

Many experts recommend a pruning in late fall or even winter. I do not back that opinion.

A spell of warm weather after pruning would stimulate the roses to new growth. The next sudden frost has a disastrous effect on the green shoots and plants.

Not the lack of frost hardiness of the plants will be the reason for damage, but the pruning at the wrong time.

If you want to do something good on your roses in fall, please cut them a little bit. Prune long canes and thin-out lateral growth to avoid damage or breakage during winter winds.

The best time to prune roses depends on where you live. The USDA developed a plant hardiness Zone map, based on the temperatures recorded across the States. To determine in which Zone you live, please use the map provided on their website.

In which Zone you live and knowing the frost dates will help you identify the right time for pruning.

For roses is not necessarily spring, when it is on the calendar:

Some signs from the nature around the roses will tell you the best time for the annual pruning.

An old gardener wisdom says to watch the blooming of the forsythia bushes.

"When the forsythias bloom, it's time to prune".

For an overall view, I figured out the approximate pruning times for the several hardiness Zones.

Anyway, if you are not sure when to prune, contact your local rose society, they will help you with that topic.

In Minnesota, North Dakota and most parts of Montana temperatures go down to under -20F and frost in late April and May is not a rarity.

In these regions, the pruning time occasionally will move to early June.

Temperatures range from -20F to 0F in regions like Indiana, Iowa or Illinois and the pruning time can be set between April and May

Most districts of Tennessee, Maryland or Arkansas are part of this Zone. Temperatures from -5F to 10F allow us to prune the roses starting mid-March.

In West Texas, parts of California and Florida temperatures rarely go down to 15F. The pruning time here may be in early winter, right before the cool weather with rain arrives.

Hot Climates and The Tropics

To grow roses in hot climates like Hawaii may be challenging, but it is possible.

In lack of seasons and since there is no dormant period, roses should be pruned year-round after florescence.